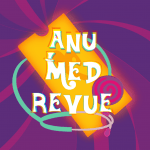 The ANU Med Revue is the theatrical spectacular of the year which showcases the musical, comedic and artistic talents of the student body. Unlike most other university revues, the ANU Med Revue is a full-scale production which follows a themed storyline and incorporates songs, dances, sketches and more!

The show is always a sell-out success and is entirely written, produced, directed, choreographed, managed and performed by medical students from all four year levels at the ANU Medical School.

The money raised from ticket sales is donated to charity and in 2018, the group raised $18,000. Since 2015, the ANU Med Revue has supported local Companion House, which assists refugees and survivors of torture and trauma.

Auditions took place throughout March and are now complete. The cast are now working hard!

The ANU Medical Students’ Society acknowledges the Ngunnawal people as the traditional and sovereign custodians of the land where our members live and study. We acknowledge their continued connection to their culture, the land, the sky, and the waterways. We pay our respects to their Elders past, present, and emerging.

Tell us about it, and we’ll rectify it ASAP!